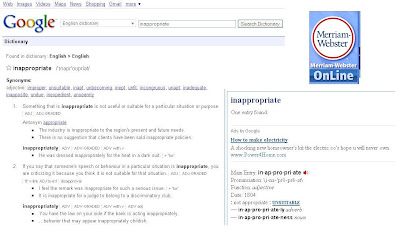 TechCrunch reviews Google's newish dictionary app here (Google's dictionary has been lurking around for awhile, but now it gets its own page here). I did a quick comparison of Google & Merriam Webster's entries for inappropriate and found they were remarkably different in scope. Google returns a lot more data (plus they provided links to other web definitions, which seemed to mostly be Wordnet links). I prefer Google's phonetic guide as it seems to be straight IPA (although their transcription of -pro- as pr'oʊ seems odd to me as it suggests a diphthong when I think they're just indicating rounding, but I never was much of a phoneticist, so no biggie).

I was particularly impressed to see some constructional patterns listed in Google entries (e.g., |'it' v-link ADJ to-inf| representing something like 'it is inappropriate to yell').

However, Miriam Webster still wins on historical data, minimal as it is.
at December 04, 2009

Well, it is a diphthong in most (though not all) varieties of English, although in broad transcription it's often represented as /o/ or /oː/. In RP, it's something like [əʊ̯] phonetically; in North American varieties it's more like [oʊ̯]. (It's more of a monophthong in Scottish English, though.) I think the reason it's often not transcribed as a diphthong elsewhere is that the change in vowel quality is mostly just a change in height, and not also place, in contrast with /aɪ/, /aʊ/, or /ɔɪ/.

What I do find odd about this transcription, though, is the placement of the stress mark; it would standardly go at the beginning of the syllable rather than after the onset.

I'll have to brush up on my Ladefoged because I thought there was a difference between a rounded vowel and a diphthong, but the wiki page on this makes it seem like any rounded vowel would count as a diphthong. Is that right? Wow am I rusty on phonetics, hehe.