Is There a Gender Gap in Linguistics? 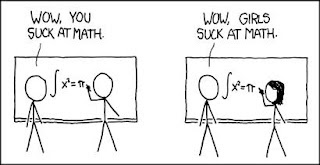 (above is the xkcd comic found here)

The interwebs is abuzz with the latest girls can't do science scuttlebutt (Alex Tabarrok at Marginal Revolution has a useful overview). This got me to wondering why this kind of speculation never seems to be applied to linguistics.

First, of course, is the fact that linguistics is a small field (I'm near certain that Language Log had a post in the last few months regarding the small size of linguistics compared to other fields, but I've failed miserably to find it). There simply aren't enough of us to cause any controversies, except when someone wants us to prove that "X" is not really a word and we refuse (see Zwicky's relevant post here).

Second, there are many easily recognizable female linguists who have been highly influential. Off the top of my head I can easily think of Barbara Partee, Adele Goldberg, Joan Bresnan, Joan Bybee, Eve Sweetser, and Eve Clark , amongst a great many others (hehe, that list TOTALLY marks me as a Buffalo functionalist).

At least as interestingly, the highly technical sub-field of computational linguistics/NLP is brimming with examples of influential female scholars, such as Ann Copestake, Paola Merlo, Bonnie Dorr, Tanya Reinhart, and Jan Weibe to name a just a small few.

The only sub-field of linguistics that seems to be male dominated is syntactic theory invention. I can think of many males who are strongly associated with the invention of a theory of syntax/grammar (though, in all honesty, no one person truly invents a theory alone), but only Goldberg & Michaelis's construction grammar comes to mind as a theory of grammar designed by female linguists (I happily solicit examples of my ignorance). Whereas, a list of male-invented grammatical frameworks/theories is easy to compile:
Is there a gender gap in grammar theorization? 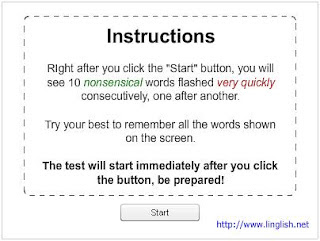 Thomas Tsoi over at his Linglish.net blog created a cool little word recognition experiment. Try it out here.
at July 26, 2008 1 comment: 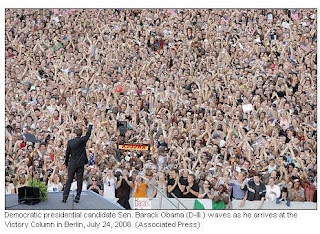 2) Assume there is such a thing as language; I have no clue how many languages are spoken in the US, but I'm sure whatever that number is, it's less than the total number of languages in the world (5,000-7,000, depending on whether you think Flemish is really just Dutch with a lisp). There are many languages with less than 100 speakers, all of whom are over 60 and live in remote villages. Did one of the remaining senior citizens wander into the US, ya know, on a whim? I kinda doubt it.
at July 26, 2008 No comments:

Having nothing to do with linguistics, I am nonetheless daring to recommend a blogger I only recently stumbled onto: Selena Dreamy's The Moonshine Memoranda. She writes carefully, long winded when necessary, but in that proper British style which includes wit and panache and a little naughtiness when appropriate (read this post, in particular).

Email ThisBlogThis!Share to TwitterShare to FacebookShare to Pinterest
Labels: blogosphere

I just completed the online Survey of American Jewish Language (HT polyglot conspiracy). No, I'm not Jewish, but the survey is about the use of language with no special requirements on who is doing the using.

To be honest, I was not impressed with the survey design. There is ambiguity in many of the response choices, making the results difficult to interpret. But, true to my word, I'm all for moving forward with using the interwebs as a tool for linguistic research. We gotta start somewhere, right? We'll tinker with the methodology as we move forward.

Just read a sentence on The Daily Dish that contained a use of "on" that I find odd:

"Steve Clemons infers on who the Chinese would vote for:"

To me, the verb infer does not use any preposition to mark its object. So, I would say "X infers Y", not "X infers on Y". My guess is that Sullivan was trying to evoke the semantics of speculates on and transferred the syntax to infer. Just a guess.


[pssst, btw, I used to be able to cut-and-past from Word into Blogger to get formatted text like colors and highlighting (the quote above was green and shaded), but now I get an error because of all the crud code that Word includes. The crud code has always been there and Blogger used to handle it, now it don't. Is this part of Google's war on Microsoft?]
at July 10, 2008 No comments: 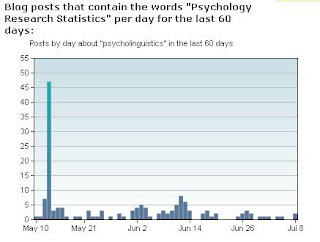 [Picture Courtesy of 3DScience.com]
Admit it, my post title got ya, didn't it? Anyhoo, Zwicky mentioned this series of articles at Slate.com: The Sex Difference Evangelists (posted July 1) by Amanda Schaffer and Emily Bazelon. The six part series takes a critical look at the claims about neurological sex-differences made primarily by two people:

I read the first two articles and I'm reasonably impressed with the reporting (something I rarely say about Slate). The authors are generally even-handed (though, it's not at all clear to me why the authors point out Pinker's Canadian nationality as if it meaningfully modifiers her profession).

Anyhoo, this quote stood out for me: "All told, what's striking about the evidence on language is not so much a profound gap between the sexes, but the large gaps in our understanding of the brain."

Email ThisBlogThis!Share to TwitterShare to FacebookShare to Pinterest
Labels: psycholinguistics 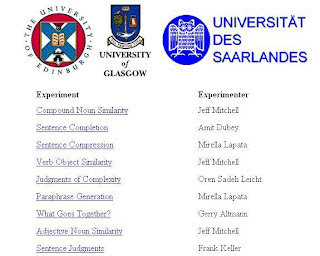 Experimental psycholinguists requires experimental subjects like any other empirical cognitive science. Unfortunately, researches are often constrained by limited resources. Typically, psycholinguists use college students bribed with money or extra credit as subjects. It's not unheard of for a published psycholinguistics study to have involved as few as 12 subjects. This has been a necessary evil because there has never been a good way to collect large numbers of subjects together and provide them with a coherent experimental design.

Lately, however, researchers are turning to the web as a place to conduct experiments with large groups of subjects. Yes, there are issues regarding control (e.g., if you need native speakers of English, how can you ensure that a subject really is a native speaker?), but these issues come up in all types of experimental paradigms. I believe that good standards and practices to ensure quality online psycholinguistic experiments will emerge over time. So, I'm all for moving ahead.

With that in mind, here are a set of sites offering online psycholinguistic experiments: