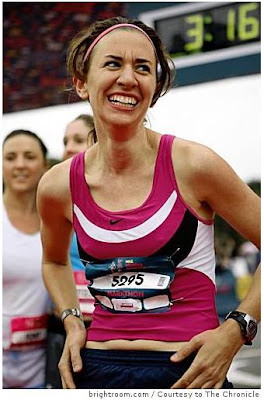 The fifth-grade teacher from New York City ran the fastest time in Sunday's Nike Women's Marathon, but she was told by race officials that she didn't win because she wasn't among the "elite" runners who were given a 20-minute head start.

O'Connell was unhappy - and as corporate sports giant Nike quickly learned, she wasn't the only one.

Faced with a blast of criticism from all over the country, Nike issued a statement Wednesday saying that it "recognizes Arien O'Connell as a winner.

Did you catch that? It says a winner - not the winner.

Even though she ran 11 minutes faster than the "elite" woman who was given first place, O'Connell's career-best finish will exist in an odd parallel universe where, no matter how fast you run, you can't win the race unless you're among a special few." [my emphases]

In typical introductory linguistics courses, we would teach students that the English indefinite article "a" is used to introduce a new referent into discourse. But of course, it's uses are far more varied, as this case demonstrates. In this case, Nike chose to use the indefinite article "a" in a partitive function implying that O'Connell was one member of a set of winners (and causing readers to infer that the set of winners has more than one member, otherwise they would have used "the" ... someday I'll brush up on Grice to be able to explain this reasoning more clearly).

Now, my take on the events in question is somewhat cynical: almost all individual-based sporting events are rigged in one way or another to favor the top pros. The practice of seeding in Grand Slam tennis tournaments is a good example (Agassi once said he thought seeding ought to be abolished, and I agree).

Arien O'Connell ran a great race and deserves to be recognized for that. But what counts as "the winner" is Nike's call, not ours. I don't have a problem with Nike's statement. One fair question, though, is whether they referred to the other winner as "a winner" too?
at October 25, 2008 1 comment: 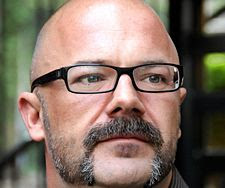 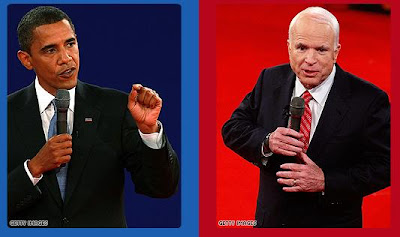 Clark: Well, Senators, through this economic crisis, most of the people that I know have had a difficult time. And through this bailout package, I was wondering what it is that's going to actually help those people out.

McCain: Well, thank you, Oliver, and that's an excellent question, because as you just described it, bailout, when I believe that it's rescue, because -- because of the greed and excess in Washington and Wall Street, Main Street was paying a very heavy price, and we know that [emphasis added].

What is the difference between a bailout and a rescue? There is a nice cognitive semantic point to be made: I think bailout foregrounds the undergoer participants who are being helped and their failure to help themselves, whereas rescue foregrounds the actor participants who are doing the rescuing and their benevolence. My own take is that a bailout presupposes the participants being helped caused their own misfortune whereas a rescue presupposes they did not.

"...the proposal has been referred to colloquially as the "bailout" or very commonly the "Wall Street bailout" (the latter term brings up more than 7,000 hits in Google News). Where is Frank Luntz when you need him? If the proposal had instead been framed as, say, an "economic recovery" plan, it would probably be far less politically toxic."
at October 08, 2008 No comments: 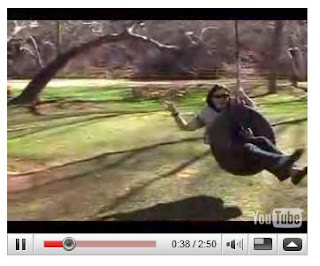 (screen shot of a guest at McCain's BBQ. Video here)

Political pundits almost pathologically believe they have greater influence than they really do. Case in point, Talking Points Memo's editor and publisher and chief blogger Josh Marshal has been trying to promote the use of the phrase "ride the swing" as a metaphor for the case when "a reporter who has gotten way too cozy with a politician and has had their supposed objectivity affected" (original explanation here). The phrase refers to a posh BBQ that McCain hosted at one of his Arizona ranches where journalists were treated to a very comfy social experience that bordered on bribery (click on "video here" below the pic). As far as I can tell, Marshal is the primary pusher of the phrase and its most frequent user (a couple other examples here and here).

I suspect Marshal's linguistic campaign will fail. Attempts by a single person to explicitly promote the use of a new metaphor are rarely successful. This is not how language works. Successful new coinages are generally adopted less self-consciously. The process is not well understood, but examples like Marshal's are few and far between. Additionally, there are already several good metaphors for related frames, such as "drank the cool-aid" (which has equally obscure origins involving jungles and religious cults). Not sure we need a new one just for journalists.

(HT to my colleague CC for bringing this to my attention. At first, we had no clue what this metaphor referred to, and as such we literally couldn't understand what it was meant to evoke. CC did some blogger detective work and discovered its origin).
at October 04, 2008 4 comments: 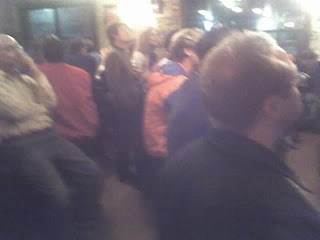 During tonight's Vice Presidential debate, Republican VP candidate Sarah Palin used the term "shout out". I don't have a transcript (yet), but it was something involving a reference to her hometown (see Daily Dish's live-blogging comment here). The Urban Dictionary's top rated definition of "shout out" is this: "A kind mention of a homey."

Straight up righteous, Sarah P., for giving props to your peeps.


(Note: thanks to BuffaloPundit for organizing the debate watching get together)
at October 02, 2008 3 comments: