the value of play for preschool children

A nice article came up in The Atlantic about the comeback of recess and play in elementary schools. My sister posted some thought about how she encourages play when she teaches her preschool kids: For our little Chico preschool, play and education are two sides of the same coin.
at September 25, 2016 No comments:

from preschool to scholar athlete

One of the most endearing things about being a teacher is seeing former students go on to achieve great things. My sister's preschool student Jack Emanuel has been named a Subway Scholar athlete. Very cool. Congratulations Jack.
at September 23, 2016 No comments:

some thoughts on data analytics for a micro business

My first thought as a new business owner trying to utilize data analytics is this: how empty this all seems. I don't need to understand my market right now, I need to break into it. How can I use data analytics to open doors? I don't have time for nuance right now, I need sign ups. I'm faced with one of the most basic problems in business: getting noticed. And I wanna do it on the cheap.

Let me stipulate that this post relates only to a small slice of DA proper: low-cost advertising DA available from Google & Facebook.

My sister just relocated her preschool, Kids First, to a new town, Chico CA, and I'm helping her buy a domain, set up a website, and do some promotion using Google AdWords Express, Facebook ads, and some local print advertising.

This is the first time I've been on this side of the data analytics equation: as a consumer of the analysis, not a producer. And my experience is telling.

Business model: We're not a small business. We're a micro business. Employees = 1 (Miss Lori). We don't need to sell a million widgets or gain a million likes. The business model of our preschool remains very old fashioned: get ten kids signed up, average that head count annually, and we're successful.

The market: Chico is a college town with 85,000 people in the city, about 200,000 in the larger area. There is a state university, a junior college, two hospitals, two high schools, two middle schools, and several elementary schools, as well as a robust farming economy (all employing professionals with kids, right?).

Advertising: Bought a small print ad in the local weekly for four weeks ($200/wk). One-time ad in the university student paper for the first week of the semester (hoping to grab the attention of new faculty who might finger through it out of curiosity). Small Facebook ad ($50), small Google AdWords campaign ($120/month). My sister "boosted" the preschool's Facebook page for a few days for $20.

Data Analytics: FB ad = zero calls. FB said 6,322 people saw her boosted virtual tour video and 411 people clicked on it in just a few days (I'm suspicious of these numbers because Lori said she limited the ad to Chico. I would be shocked if that many Chicoans clicked her video in a couple days). Zero calls. I started the AdWords campaign on September 3. I limited the area to the Chico region (those 200k people) because I don't want to pay for clicks from people who are looking for preschools in San Francisco. We've gotten 4 clicks in about 48 hours. Zero calls.

This is early, of course, but still, this all seems so empty because of the nature of our business. We don't need clicks or views or likes: we need parents to sign their kids up. There is a disconnect to me between the old fashioned, brick-and-mortar business reality of trying to profitably run a preschool and the virtual reality of these meager data analytics. The NLPer in me likes the fact that AdWords shows me which search words drive clicks, but the business owner in me says, where's the beef? I need a parent to pay me money. Don't care 'bout no clicks.

I'm not in the business of advertising DA, but I have some appreciation for the tools and techniques. And even I'm frustrated trying to connect the dots. Or more to the point, I don't know how to use data analytics to go from clicks to phone calls (to actual sign ups).

I get that using DA may prove useful in the long run, but first we need old fashioned visibility. Without that, nuance is worthless. I can only imagine how frustrated and perhaps infuriated many small business owners are at this same disconnect between their business models and the services offered. This experience has already deepened my appreciation for the customer experience in the DA ecosystem.

But ultimately what I think is this: Data analytics, schmata analytics. I don't need a data scientist. I need Don Draper.
at September 05, 2016 3 comments:

Newest and Greatest Preschool in Chico 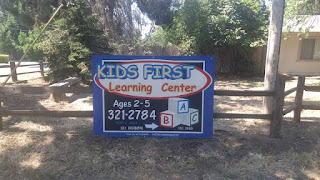