It's all too common for prescriptivists to complain about word usage deviations, as if a word had one fixed meaning forever and ever. This is not true. A couple of good examples popped up on The Daily Dish when guest blogger Conor Clarke, a smart and well educated journalist, used two words (arbitrary and cynical) in ways that deviate from the way I would use them (and from what I would consider traditional usage); yet, his usage conforms to the way both of these words seem to be evolving in general usage in American English:

"We are all born with talents that are equally arbitrary -- strength and intelligence and social grace -- and yet we all compete for prizes under the impression that the outcomes are fair. Perhaps something called free will enters the picture at some point. And perhaps not: The ability to work hard might be doled out just as arbitrarily at a Y Chromosome or a great voice. I don't know how you'd prove it either way. Anyway, the cynical conclusion here is that there's nothing inherently just or fair about these outcomes."

On Arbitrary
For me, something is arbitrary when it is a function of decision making (note its obvious relationship to arbitrate). For example, WordNet's definition:"based on or subject to individual discretion or preference or sometimes impulse or caprice." But Clark uses it to mean something like 'not under our direct control' when he describes genetic traits as arbitrary. I can imagine an historical shift whereby decisions that are arbitrary came to be viewed as being made on the idiosyncratic whim of the decider (rather than based on some sound, objective, logical reasoning). Hence, the word came to mean 'unfair or without sound reason'. Then, quite recently I believe, the word shifted again when users found a salient connection between 'lacking sound reason' and 'out of one's direct control'. And this seems to be how American English speakers of Clarke's generation (I believe he's about 15 years younger than I am) use the word. And this helps explain why it's now commonly used for situations where an outcome is indifferent to fairness.

On Cynical
For me, a person is cynical when they reduce the intentions of others down to one root cause, namely selfishness. For example, WordNet's definition: "believing the worst of human nature and motives; having a sneering disbelief in e.g. selflessness of others." But Clarke uses it to mean something like 'preferring the explanation that is most indifferent to fairness'. The conclusion he predicates as cynical has nothing to do with human motives or intentions. I believe what he's saying in the last sentence of the passage above is that there are two competing beliefs:

Clarke then says that to prefer Belief B is to be cynical.

Final Thought
As for me, I believe word meanings are arbitrary, but then again, I'm cynical.

Them Maths Is Hard 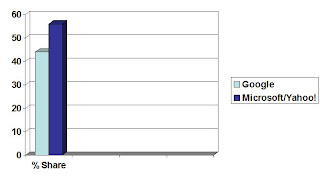 This morning's NYT contained an article on search engines which contained a claim of such discombobulated mathematical incompetence, I just had to share:

I don't have to get all Mark Liberman on you to explain what's wrong with this claim. If Microsoft/Yahoo! doubled their 28% market share, that's 56%, at which point they would no longer trail Google who could have no more than 44% of the market.