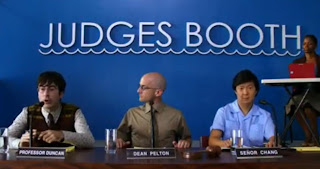 (screen shot from NBC's Community)
I'm not normally a spelling fanatic, mainly because I'm such a horrible speller myself. However, I'm also not a set designer for a major network sitcom production. Unlike the person who designed the backdrop for the recent episode of NBC's Community which featured a gigantic sign reading "JUDGES BOOTH." I'm reasonably certain that the booth in question is possessed by the judges in question, rendering the preferred orthography as "JUDGES' BOOTH" (same in MLA and APA, see Purdue's excellent OWL site for MLA and for APA):

I guess I'm a few months behind the curve on this one, but I just watched the Google Wave demo about the new social media/collaboration tool and I'm seriously impressed. They said it should go live in 2009, so maybe by Christmas? Pretty please...

In any case, when the video first started, the guy said something that caught my ear. He mentioned that traditional email is built around the snail mail model where a message is an object that goes from a sender to a receiver. But, Google Wave discards that model in favor of a model of a "conversational" where the conversation as a whole is a single object which simply gets updated in a single place, not sent around (like a chat session).

Also, near the end, the speaker made what I took to be a geek version of a linguistic relativity claim: he said the it was only the Google Web Toolkit (HTML 5 & Java) that allowed him to think of Wave's possibilities that he never would have thought of otherwise. I'm not sure this is really true, of course, but a cute thought nonetheless.
at October 04, 2009 9 comments: