NLPers: How would you characterize your linguistics background?

That was the poll question my hero Professor Emily Bender posed on Twitter March 30th. 573 tweets later, a truly epic thread had been created pitting some of the most influential NLPers in the world head to head in a contest of wit and debate that is truly what the field of NLP needed. Unfortunately, Twitter proves hapless at being able to view the thread as a single conversation using their app. But, student Sebastian Meilke used a Chrome extension called Treeverse to put together the whole thread into a single, readable format, complete with sections!

If you are at all interested in NLP or linguistics, this is a must read: NLP/CL Twitter Megathrea.

I would be remiss if I didn't note my own small role in this. Emily's poll was sparked by my own Tweet where I said I was glad the Linguistics Society of America is starting their own Society for Computational Linguistics because "the existing CL and NLP communities have gotten farther and farther off the linguistics path" 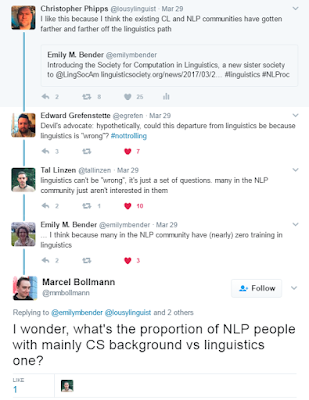