The birth of a metaphor

A Twitter exchange with Ben Zimmer over the metaphorical use of the phrase "pause button" in the new TV show The Americans (set in 1981) led me to think about how metaphors begin their lives. I didn't watch the episode in question, but apparently several viewers noticed that the show used the phrase "pause button" metaphorically to mean something like to put a romantic relationship on hold.

Ben tweeted this fact as a likely anachronism, presumably because the technology of pause buttons was too young in 1981 to have likely jumped to metaphorical use by then. I was not the only one who immediately took to Google Ngrams to start testing this hypothesis. In the end, Tweeter @Manganpaper found a good example from 1981 from some kind of self-help book.

But what interests me is an example I found from 1987:


Consumers have pushed the "pause" button on sales of video-cassette recorders, for years in the fast-forward mode. 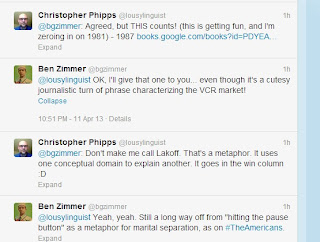 I'd have to review my historical linguistics books, but I don't think words necessarily shift their meanings radically all at once. I believe they can take on characteristics of associated meanings slowly, thus widening or narrowing their meaning as their linguistic environment unfolds. Eventually, a word can come to mean something quite radically different than it originally meant. I see no reason that the life of a metaphor could not follow a similar trajectory. Ben objected to the fact that the 1987 use of "pause button" I linked to was semantically linked to the literal use of actual pause buttons because it dealt with the conceptual space of VCR sales. But my hunch is that this is how many metaphors start their lives, making small conceptual leaps, not big ones. I could be wrong though. The sad truth is that finding good empirical data for the life span of metaphors is extremely difficult. The fact is that even with the awe inspiring large natural language data sets currently available in many languages, studying a linguistically high level data type like metaphor remains out of reach of most NLP techniques.