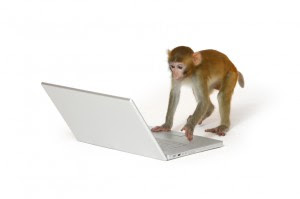 (image from make-noise.com)
I’d like to present a brief lesson in contemporary linguistic research with the goal of showing that we live in a marvelous age of quick and ready research tools freely available to even the most humble of internet users. Hence, a little effort goes a long way. My point is that when we make claims about language usage (and by "we" I mostly mean those of us who present our claims about language to the public via the interwebz) we need not make such claims based on our intuitions and emotions; rather, we can perform a little due diligence in a way that linguistic pontificators of the past simply could not. And bully for us.

My subject for today’s Full Liberman is this classic example of language mavenry from Prospect magazine: Words that think for us by Edward Skidelsky, lecturer in philosophy at Exeter University (HT Arts and Letters Daily). In this article, Skidelsky laments the following “linguistic shift”:

No words are more typical of our moral culture than “inappropriate” and “unacceptable.” They seem bland, gentle even, yet they carry the full force of official power. When you hear them, you feel that you are being tied up with little pieces of soft string. Inappropriate and unacceptable began their modern careers in the 1980s as part of the jargon of political correctness. They have more or less replaced a number of older, more exact terms: coarse, tactless, vulgar, lewd. They encompass most of what would formerly have been called “improper” or “indecent.”…“Inappropriate” and “unacceptable” are the catchwords of a moralism that dare not speak its name. They hide all measure of righteous fury behind the mask of bureaucratic neutrality. For the sake of our own humanity, we should strike them from our vocabulary.


UPDATE: A very lively discussion of the meaning of the words in question (something I largely ignore) has broken out on Language Log here)

This article makes four testable linguistic claims:
With a little investigation using entirely freely available online linguistics tools, we can easily fact check each of these claims. In the interest of time, I'll answer the first two together.

First and Second -- Has the frequency of inappropriate and unacceptable increased since the 1980s? & have they replaced the other words?

In order to quickly get some data, I took this to mean the frequency of the first two words have increased while the frequency of the other words have decreased since the 1980s (is this is an unfair interpretation?. In any case, that’s how I operationalized my methodology.). Thanks to Mark Davies excellent resource, the TIME Corpus of American English (100 million words, 1923-2006, requires registration, but it's free) we can quickly get a snapshot of the frequency of each word’s usage for the last 9 decades (not bad, huh? Thanks Mark!!).

Caveat: raw frequency is a poor data point by itself. What we really need is a way to compare apples to apples and oranges to oranges, and the problem we have is different sized corpora for each decade. Fear not, Davies does this work for us. His handy dandy interface allows us to report frequency per million, thus giving us comparable frequencies across different decades.

Using the TIME corpus, I discovered the frequency per million of each word per decade. Then I entered that data into a spread sheet. I used Excel 2007 to create a line graph of these frequencies.

And here's the graph: 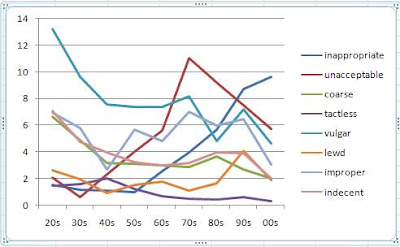 What this shows us is that both inappropriate and unacceptable do in fact show a rise in frequency (consistent with Skidelsky's claim), but starting in the 1960s, not 1980s. However, unacceptable shows a more recent dramatic decline, which is inconsistent with his claim. Lewd actually made a bit of a comeback in the 1990s (thank you Mr. Clinton?), but has since dropped back (it's a bit of a jumpy word, isn't it?). The other words do seem to be falling off in usage, consistent with Skidelsky's claim. So the picture is not quite what Skidelsky thinks it is, though he does seem to be on to something.

UPDATE: See myl's plot of this same data (but grouping the words as Skidelsky does) here which suggests that "'coarse', 'tactless', 'vulgar' etc. declined until WWII and then stayed about the same, perhaps with an additional decline in past decade; while 'inappropriate' and 'unacceptable' rose gradually from the 1930s to 1970 or so, and then leveled off. " The plot does suggest that we could view the two groups as having roughly inverted frequency, somewhat conforming to Skidelsky's hunch.

Third -- Are these other four words “older”?

Unfortunately, as I am no longer affiliated with a university, therefore I have no access to the OED (I’ve decided not to pay the $295 for their individual subscription. Condemn me if you must). If anyone would care to look those up and post them in comments, I’d be happy to update. Most of these words have multiple senses and the question is, when did the most relevant sense enter usage? For that, the OED is most valuable. Again, you can do that work for me, or send me a check for $295.

However, a simple search of the Merriam Webster online dictionary gives us a quick answer:


UPDATE: much thanks to commenter panoptical who provides the following OED dates which appear to largely confirm the Merriam Webster dates, with the notable except of lewd which dates back to Old English it seems...does have a certain Beowulf ring to it, doesn't it?


Fourth -- Are the other words "more exact"?

Finding a way to empirically test this is a challenge I will take up in later post (you can see Wordnet coming, can't you?). It will require teasing apart senses and relationships between senses (oh my, I wish I had the OED right now...).
at December 02, 2009

If you add up the counts for the words in the two cited categories, the results suggest a (post hoc, and therefore dubious) pattern.

The plot is shown here:
http://languagelog.ldc.upenn.edu/myl/Thinking1.png

It suggests that 'coarse', 'tactless', 'vulgar' etc. declined until WWII and then stayed about the same, perhaps with an additional decline in past decade; while 'inappropriate' and 'unacceptable' rose gradually from the 1930s to 1970 or so, and then leveled off.

excellent work! you get extra credit.

Looks like M-W did a pretty good job, overall. If you put up a paypal button you might be able to get enough donations to cover an OED subscription.

One of the things I noticed was that a good number of those words underwent the sort of moral transformation that Nietzsche posits when he described "good and bad, good and evil." Lewd coarse, and vulgar, at least, started out meaning plain, common, ordinary, or, in the case of lewd, a layperson (as opposed to clergy). Improper and Indecent strike me as exactly the same sorts of words as inappropriate and unacceptable: there is an a proper, appropriate (note the common stem) way to act, a decent and acceptable way to act; and then there's the opposite. None of the words started out carrying anything specific; it was just assumed that common people would act coarse, vulgar, and lewd, while noble people would know how to act properly.

I guess I should mention that those dates are from the OED, and also apologize for failing to proofread my comment before posting it. The size of this comment box makes it hard for me to scan for errors; I suppose I'll compose future comments in a text editor and copy-paste them.

panoptical, awesome, thanks! Nice to see M-W is reliable.

Interesting point about the general direction of semantic change. Does this conform to the original author's point about moral decay? Hmmm...

Some public library websites offer free access to the online OED, at least mine does.

goofy, nice idea. I'll see what I can find. Thanks!

Excel's default colours are tasteful but not easy to distinguish (i.e. I can't tell which line belongs to which label). It would be helpful to either change to more garish colours or directly label the lines.

yeah, it's also a function of Blogger software. I simply took a screen grab of the Excel graph and posted it as a picture. it would be nice if there were a plug-in where bloggers simply input the values directly the the blog generates the graph.

Your research is interesting, but the point of my Prospect article was that a new and broader meaning of "inappropriate" and "unacceptable" has gained ground over the last 20 years. As to whether their overall use has gone up or down, I am agnostic.

Edward, thanks for the comment and clarification. It's certainly a challenge to discover contemporary shifts in meaning. It wasn't my intention to nit-pic your article, rather it just seemed like a convenient opportunity to show how online resources could be used to help understand linguistic patterns and change.

I'm a little late here, but if you back to the Time corpus and search for inappropriate with any noun one word to the right and another search with any noun within 4 words to the left, you'll see which nouns this adjective has modified (or complemented). Do the same for unacceptable. This can give us an idea of the semantic shift that has/is occurring. Note the 7 instances of "inappropriate relationship" in the 1990s. I don't have time to summarize the patterns, but a few seem pretty obvious.
Keep up the lousy linguistics :)

Rob, that's a clever suggestion, I'll give it a try. I've often used The Collins Collocation Sampler for this kind of thing, but it wouldn't give me a picture of changes in collocations over time, so this is a nifty way to track that. Thanks!

doh! How coult I have forgotten about The Online Etymology Dictionary.