the largest whorfian study EVER! (and why it matters)

Let me take the ball Mark Liberman threw on Monday and run with it a bit. Liberman posted a thorough discussion of Fausey and Broditsky's neo-Whorfian English and Spanish speakers remember causal agents differently. Specifically, he invited readers to carefully examine the methodology of the experiments themselves, and not just focus on the conclusions. It turns out that a few years ago another set of neo-Whorfians, Jürgen Bohnemeyer and company, published a paper that addressed similar methodological concerns:

Ways to go: Methodological considerations in Whorfian studies on motion events. (With S. Eisenbeiss and B. Narasimhan) Colchester: University of Essex, Department of Language and Linguistics (Essex Research Reports in Linguistics 50: 1-19). 2006.

But before I get into the details, let me state clearly why I think this is important. In other posts, I have dismissed popular lingo-topics like language evolution as outside the mainstream of linguistics because they don't bear directly on what I consider to be the center of the linguistics universe: How the brain does language. But linguistic relativity (aka, The Whorfian hypothesis) is one of the great questions of linguistics and cognitive science precisely because it bears directly on the question of how the brain does language. And we're only just now developing the proper tools and methodologies to study the question with scientific rigor. It may turn out that language does not affect other cognitive processes or the effect is minor. I don't care. I just want to know one way or the other. And it's work like Bohnemeyer's and Broditsky's that will lead us to knowing, eventually.

Bohnemeyer et al. start with an assumption about language types based on Talmy's cognitive semantics typology that classes languages as either satellite-framing or verb-framing, From Talmy:

In this typology, English is a satellite-frame language and Spanish is a verb-frame language. Bohnemeyer et al.  conclude that “verb-framed” (V) languages lexicalize path information in the verb root. Consequently, they require a separate expression for the “manner” of the motion event [...] The additional syntactic position renders manner in V–languages less “codable”. Consequently, manner is encoded more routinely in S–language discourse. Thus, the question arises whether S–language native speakers also pay more attention to manner when committing a motion event to memory and/or comparing it to other events." (emphasis added).

So satellite-frame languages like English push path info into separate phrases and verb-frame languages like Spanish push manner into separate phrases. Take the following English sentences:
In English, the manner of motion (rolling vs. bouncing) is encoded on the verb (i.e., different verbs), but the path is encoded as a separate phrase ("down the hill") as opposed to something like this:
Here the verb move is fairly simple and encodes no manner info by itself. As a note, Talmy's typology is based on colloquial and high frequency language use. Many languages allow both kinds of constructions, it's just that one is highly frequent in "everyday" speech.

And there's the crux of Bohnemeyer et al.'s experiments. But, they also noticed conflicting results in several other neo-Whorfian studies that they believed were a result of methodology so they set out to investigate methodology. Those other papers used a similarity-judgement task, so Bohememeyer et al. used that task as well. Particularly, they gave particpants a series of three short animated videos to watch. For example, one video was a tomato rolling down a hill. Their methodology is difficult to understand if you just read through, so I'm going to try to help with some bold-facing and re-structuring of paragraphs and a few re-wordings. What follows is a near-quote:

...we conducted a similarity-judgment task analogous in design to those reviewed above with native speakers of 17 genetically and typologically diverse languages – to our knowledge, the largest sample of languages ever used in a Whorfian study. To control for the effects of individual manner or path contrasts, we cross-classified six path types with four manner types, realizing all possible combinations in our stimulus set and counterbalancing for frequency of occurrence.

This resulted in 72 triads with a target clip, a same-manner variant and one of the three same-path variants. The variants were presented side by side, 1 second after the target-clip presentation ended (see Figure 1). 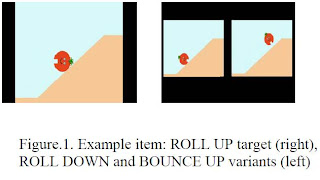 Their methodology was as follows (emphasis added to help readability):
So participants were watching a bunch of short videos in sets of three [A, B, C]. If I understand correctly, for each set, they were asked to determine if B or C is more similar to A than the other.  For example, imagine I show you three cartoons:

Now, if your native language forces you to push path information into separate phrases like prepositional phrases (e.g., "up a hill"), it may be the case that this would cause you to say C is more similar because the path is the same. Hence your language caused your perception of similarity to behave in a particular way, hence language affects thought.

So what did they discover?
I found the following passage to be the most important in the paper, especially wrt Fausey and Broditsky's work:

If only Polish (an S-language) and Yukatek (a V-language) had been selected to test for language-specific performance effects in our nonlinguistic task, the highly significant difference between speakers of these two languages in their degree of manner preference would have supported a strong version of the Whorfian claim. Conversely, had we chosen only to contrast German (S) with Spanish (V) using the identical stimuli and experimental procedure, we would have reached the opposite conclusion, since speakers of these languages do not differ significantly from one another in the frequency with which they base their similarity judgements on manner of motion.

The lesson here is that methodology counts. Fausey and Broditsky used a very small participant pool and it's hard to tell how that affected their results.


FYI: the word profound does not occur in Bohnemeyer's article.

Wow. The things upon which one stumbles while searching the Web. This is some wacky stuff. I love it. To think I was just looking for more ball motion words besides roll and bounce.

yep, the power of curiosity. have you tried StumbleUpon?

Now, I wonder... why misspelling the name of one author? Surely intentional but why...

My, they're big fish but I didn think that much!

German is the language that is spoken by almost 2 billion peoples around the world. Learning this language would give one self confidence to look the world in a different perspective. You have made me to realize that in a moment on reading this article. Thanks for sharing this in here. By the way you are running a great blog.