the linguistics of heaven and hell

The value of pop culture data for legitimate research is being put to the test. Exactly what, if anything, can the reality show Big Brother tell us about language change over time?

Voice Onset Time is a measure of how long you wait to begin vibrating your vocal folds after you release a stop consonant. Voiced stop consonants like /b/ and /d/ require two things: 1) stop all airflow from escaping the airway by closing the glottis and 2) after the air is released, begin vibrating the glottis (by using the rushing air). For non-linguists, think of a garden hose. Imagine you use your thumb to stop the water for a second and you let the pressure build, then you let go and water rushes out, but then you use your thumb to clamp down just a bit on the water to spray it. This is kinda like the speech production of voiced stop consonants in human language. 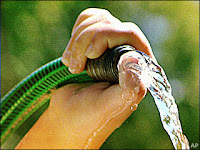 (image from Kval.com)
Though I’m no phoneticist, I really like VOT as a target of linguistic study for one crucial reason: it’s a clear example of a linguistic feature that varies according to your human language system but which you do NOT have conscious control over. What that means is that you cannot consciously change the length of your own personal VOT. Go ahead, try it. Make your VOT 20 milliseconds longer. Go ahead, I’ll wait…

Of course you can’t. Well, not consciously, but what researchers have found is that your brain, quite independent of conscious will or knowledge, can! Lab studies have found that people will unknowingly alter their VOTs according to certain situations, and the results are predictable. For example, they found that when listening to a set of long VOT stimuli, subjects will begin to lengthen their own VOTs, in essence accommodating the longer VOTs. Over the longer term it has also been shown that people will lengthen their VOT over their lifetime to accommodate cultural shifts. It has been shown that The Queen Mother herself had a longer VOT in her later life than during her younger days (few other people have been recorded consistently over a long period to provide such valuable data).

Here’s what Bane et al. did: They took recordings of confessional sequences from the UK reality TV show Big Brother (where groups of strangers are made to live with each other and occasionally speak to a camera alone like a video diary) and tested what happened to 4 crucial individuals (the ones that stayed on the show long enough to provide several months worth of data points). What they found was that their VOTs did in fact change, though no linear pattern was discovered (i.e., they did not simply get longer in a steady line). This paper is labeled as a progress report because they don't have a firm hypothesis about what actually is happening. Nice trick there boys, ;)

They did find one interesting thing: During part of the show, the house mates were physically divided into basically a caste system where half the people were low caste and half were high (a heaven and a hell). And this seemed to have an effect on VOT as well (sociolinguists are slap happy about this, I'm sure).

I haven’t looked at the actual numbers very closely, but in section 6, they say “Housemate trajectories seem to diverge when the divide is present…” However, just taking a glance at the Figure 3, it looks like they diverge at the beginning, then converge at the end, episode 65 (and remain somewhat similar until several episodes of non-DIVIDE have gone by). If my cursory glance is correct, I would assume it takes awhile for the convergence to manifest, and then it persists for awhile after DIVIDE is gone. But this is just me looking at the picture, not the actual data.

Finally, and this is just a readability point, but I would order the names in Figure 3 in the same order as the end point of each trajectory, making it easier to follow who is doing what.

Enjoyed this, but you should know that the Queen Mother's VOT is currently zero, as she's dead.

You should note that the Queen Mother died in 2002!

Oh, in fact (sorry to pile it on!), it looks like you've lost the last letter from each author's name. Should be Bane, Graff, and Sonderegger.

I've been looking forward to seeing this in print! I spoke to Peter Graff in September about this.

Awesome. Thanks for this post. I think I'll do a similar one at replicated typo if I can manage to think of anything new to add to it.

Richard, there's much left to be said, of course. They left interpretation wide open.

There are lots of information about latest technology and how to get trained in them, like Big Data Training in Chennai have spread around the web, but this is a unique one according to me. The strategy you have updated here will make me to get trained in future technologies. By the way you are running a great blog. Thanks for sharing this.