the perils of translation: does und mean well?

I'm watching the truly powerful 2009 Oscar winning German film The White Ribbon on Netflix. Even after a few minutes it has grabbed me and impressed me with its simplicity and power, in the style of many great films. Hollywood used to make films like this. Films that mattered. Films that taught deep truths about what it means to be human. Films like "Inherit The Wind", "Guess Who's Coming To Dinner", "To Kill A Mockingbird". Now Hollywood makes three Jennifer Anister rom-coms a year and panders to fan boys... but I digress ...

My German is pretty rusty, but the film's dialogue is simple enough (in a good way) for me to catch most of it even without the subtitles, which is exactly the source of the linguistic point I want to discuss. In one early scene, the narrator, a teacher, recounts an incident involving himself* and a student wherein the student was endangering himself, so the teacher demands the student explain his actions. When he fails to get a proper response, he says repeatedly Und? ... Und? ... German und is easily translated as and but the film's translators choose to use the English word well instead. 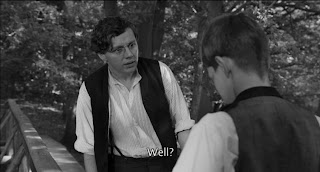 (screen grab from Netflix)
As a native speaker of English, I can see the reasoning behind well, yet I must say, it's equally plausible to use and in that situation as well, maybe even more so. The use of well in English would suggest a certain formality that the translator felt was proper, but it also makes me, as an English speaker, feel a bit awkward, like I'm being fed an anachronism. Perhaps that's appropriate for the movie, I'm not sure, it just struck me as an interesting linguistic choice. It's a nice example of the beautiful ambiguity of lexical items, really. For example, just a few scenes later the teacher encounters Eva and asks her about who she is and what he's heard about her, namely that she's a new nanny in town, and her response is und, but it is translated as English so: 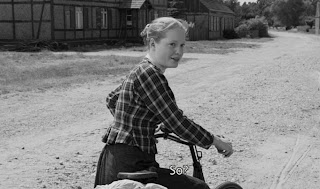 (screen grab from Netflix)
Again, as a native speaker of English, I can "get" the translation, but still, I'd be perfectly happy with and in both. I've never been a translator and I have much respect for the difficult job professional translators do navigating these treacherous waters. I don't mean to second guess. Rather, it strikes my as an interesting point of discussion.

I'm a sign language interpreter who deals with this on an everyday basis. In American Sign Language, one sign can be interpreted in spoken English in a wide variety of ways, and one must make split second decisions on the appropriateness of specific word choices, taking into consideration the in/formality of the setting, the relationship between people in the conversation, as well as (and this is important) the expectations of the speaker (or signer) and the audience.

Sarah, yes, those split decisions must be tricky indeed. I wonder though, given time to consider, if German und and English and can occur in roughly congruent situations, and the German original uses und every time, would you choose those use different English forms?

I can suggest one more factor that plays a role in choosing an appropriate translation (although it is not applicable to the situation you described). In my student days, I used to make a little extra cash translating films - or rather, film scripts to be read out by professional actors later, since most of the films on Russian TV are dubbed. To translate 'und' in this scene I would have definitely chosen "ну и?" rather than the straightforward "and" - "и". The reason is that although both forms loosely correspond to the original meaning, the lip movement of the actor when he produces the rounded /u/ in German will correspond to the russian "ну и" much better than to the short unrounded /i/, which will definitely make the viewer cringe.

So many things at play :)

Frøken, interesting point about matching up translations with lip movement. Hadn't thought of that.

Furthermore, that two words from different languages are related doesn't mean their use is the same. They may coincide in most cases (in the example here, 'and' and 'und' coordinate sentences?), but these does not mean that they are used in the same way, specially if they are speech markers (like the words you coment here). Languages are not as equivalent as they appear to be.

I guess that the translator beleived that 'and' was not the best English word for the contexts. The lip correspondence factor would be a heavy factor if the film was dubbed. In subtitles is not a factor, the formal factors are be line lenght and time exposure.

Although it is assumed that L1 use reduces anxiety in monolingual language classes (Allwright & Bailey ,1991), the situation could be different in advanced level classes.For example see more, the findings of the study by Ayd?n (2001) revealed that some advanced level students showed annoyance about L1 use.